Join us! We are currently worshipping in person, socially distanced and with masks. We also live-stream our services on our YouTube channel. See the link near the bottom of the page. 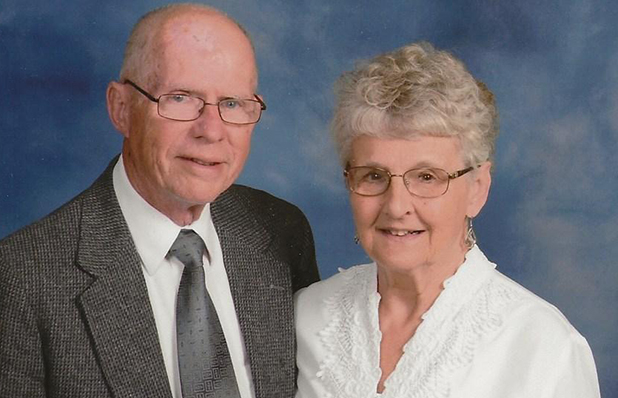 We were happy to join Neffsville Mennonite on June 9, transferring our membership from East Chestnut St. Mennonite Church. The Ambassadors Sunday School class welcomed us so warmly from the first visit, that we kept coming back. We are challenged and blessed by Hunter's sermons. We have enjoyed the Wednesday evening meals, and singing in the choir under Rashard's skilled leadership. Dwight attends the Thurs. morning men's prayer group. Edna enjoys Women's Ministries meetings.

Dwight grew up on a farm in western Missouri. He attended a one-room school through 8th grade. He attended Hesston as a high school senior and first year of college and graduated much later from La Salle College in Philadelphia. Edna grew up along the “mainline” near Paoli, PA., graduated from Lancaster Mennonite High School in 1958 and Reading Hospital School of Nursing in 1961. Dwight has one sister and one brother. Edna has two sisters and four brothers (one deceased). Her parents were Frank and Lydia King.

We met in Missouri in 1959 when Edna went there to visit her sister. Dwight took Edna to a hayride on his Harley and that was the start of something great. He soon decided that to be near her, he would request his two years of “1W Service” (required alternative to military service in the 60s) to be served at the State Hospital at Norristown PA. It was a good move! After those two years, we were married at Edna's home church, Frazer Mennonite, in Oct. 1962.

We lived in Missouri for a year, where we had our first daughter, Karen. We did a year of Voluntary Service at Frontier Boy's Village, Woodland Park, Colorado. We moved back to PA where Dwight worked as a computer programmer for Western Electric, and Edna worked as a nurse. Our daughter Krystal was born in 1966 and son Keith in 1972.

In 1976 Dwight was taking flying lessons from Edna's brother, Virgil King, but Virgil died in a plane crash before the lessons were completed. That was devastating for us. But Dwight kept flying and got the ratings he needed to serve as a pilot for Africa Inland Mission in East Africa. We lived in Nairobi, Kenya from '78 to '81. Our whole family loved that experience. On two occasions, Dwight co-piloted a Cessna 206 from PA, across the Atlantic, and to Nairobi. After Africa, Dwight worked as a pilot for C.B. Hoober Co. in Intercourse for a short time, and then as Data Processing Manager at Philhaven Hospital until retirement, along with part-time flight instructing.

From 1984 to 1993 we served as a “Presenting Couple” for Mennonite Marriage Encounter weekends. That was a very difficult challenge, but very good for our relationship!

Karen married Roland Moore, who she met at boarding school in Kenya. They currently live and work in Casa Blanca, Morocco. Their 5 children and 10 grandchildren all live near Greenville, SC. Krystal, married to Kim Johnson, lives in Indianapolis. Keith, married to Sara Schwartz, lives in Philadelphia with their daughter, Lydia. We now live in a cottage at Calvary Homes Retirement Community.

Dwight still enjoys flying and does some flight instruction at Smoketown airport. For 25 years he has sung with the Lancaster Red Rose Chorus. He performs with a barbershop quartet called “Three Dads and a Lad”. He's an avid walker, with a goal of walking at least 5 miles a day. He enjoys golf, and more golf, reading, board games, and computer games. He volunteers at Lancaster County Food Hub.

Edna enjoys swimming, flower gardening, reading, board games, puzzles, crocheting, drawing and painting, and making picture greeting cards. Over the years, whenever the snow is just right, she has created dozens of detailed snow sculptures. She volunteers in the health care unit at Calvary Homes.