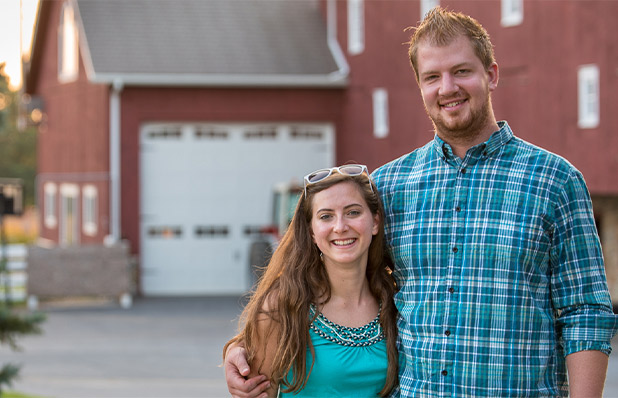 It seems natural that we get to know Jordan and Carren Weidler after last month’s article where we met Marcy Rahner. It was Jordan and Carren that first suggested to Marcy that she should visit Neffsville Mennonite Church. “It didn’t take too long, we were [still] meeting new people at Neffsville and it was like ‘Oh, yeah. Your Marcy’s neighbor!” Jordan laughs. Jordan and Carren Weidler began attending Neffsville Mennonite Church in the fall of 2017, but their faith journey begins much earlier than that. Jordan grew up attending a Nazarene church in his hometown of Reading, PA. The youngest of four boys, he also has a younger sister. “It was awesome,” he smiled. “I love my family!” Seeing his older brothers so involved in church, and connecting with God through daily prayer and in nature impacted him and shaped his faith as he grew. Carren and her younger brother, Martin, grew up on Long Island, NY, attending a Methodist church. “My family attended church every Sunday, but we didn’t really talk about it too much at home.” After her parent's divorce when she was eight she moved with her mother to the Lancaster area and continued attending church, remaining active in the youth group during high school. It became difficult, however, to relate “church speak” to her life during those high school years. Upon graduating from Manheim Township High School she attended Penn State - Main Campus. “God was not too high of a focus” there, and faith took a back seat to exploring the many options available to a freshman finally free from the constraints of home. The church was left behind for a time. Penn State is also where she rediscovered her faith and the church. She was to spend the summer serving in an internship and needed a place to stay. A mutual friend connected her with a host family who lived out their faith in practical ways that resonated with Carren. They modeled a loving, Christ-centered, community. A mentor walked with her, invested a lot of time in her, encouraged her always, and reminded her that she is forgiven. She was led to see herself as God sees her. This experience now infiltrates how she interacts with other people. Carren graduated from Penn State and began working for Mars Chocolate, in their national office in New Jersey, as an industrial engineer. This was her chance to get away from home a little bit and make it on her own. Ironically, she was assigned a project at the Elizabethtown plant, bringing her back to the county! Jordan graduated from West Chester University and began working in the Reading area as the director of a school. After several years he decided he wanted to get back into teaching and found a job in the Lancaster School District, commuting back and forth to work each day. So, how does a young man from Reading meet a young lady from New Jersey? The way many, many people meet these days. Through an online Christian dating site. Jordan’s sister met her husband there, and two of his best friends found spouses there as well. “It was like, alright, I’m just being stubborn now,” so he signed up and began searching. Not being interested in a long distance relationship he limited his searches to within 10-20 miles of Reading, which he had listed as his home address. Not having much success, he decided to remove the limitations on his search and found Carren’s profile. “Oh, man, she’s really pretty, but she’s living in New Jersey!” It was a lot farther away than he had been hoping.

Carren picked up the story, explaining how, despite now living in Lancaster with her Mom because of the Elizabethtown project, her address was still listed as New Jersey. They began exchanging email, and phone calls, only to discover that where he worked in Lancaster was within 2 miles of where she was living. In fact, Carren volunteered at the facility, the YWCA, where he worked! It didn’t take long before they met, and, as they say, the rest is history. The one thing they both wanted was a church they could call their own, and so began the church tour which saw them visit a dozen churches in as many months. What were they looking for? Young adults, for sure, but also an intergenerational congregation. “Neffsville knocked the socks off that category!” During that time they learned a lot about what it means to be welcomed in as a guest, and how different churches approach that in different ways. At Neffsville, the only church where they knew someone here before they checked us out, they were introduced to Katelyn North. That initial conversation and connection kept them coming back. The next Sunday they dropped in on the Young Adult Sunday School class and were pleased to discover that the Lead Pastor was leading the class. “It was neat to see a pastor who was willing to get involved with the Young Adults.” When asked for more details about their “church tour” it was discovered that this was not a haphazard process. Being an engineer, Carren had devised a rating system. Qualities, desires, and needs were written on sticky notes and posted. After much discussion they compiled the top 20 qualities they were looking for in a church, then ranked them from most important to negotiable, and settled on their top ten. Community was a big one. “It was what we were craving.” Worship (Carren) and theology (Jordan) were also important. I need to have my faith “provoked” or “awakened” by the worship, Carren shared. Influenced by a book by pastor and author, Greg Boyd, they had focused their search on Anabaptist churches. By the time they landed at Neffsville Mennonite they were already engaged and were married here December 16, 2017.

The connections continue to deepen, as they are co-leaders of a Young Adult Life Group, created under the leadership of NanaSue Walker, Pastor of Lay Ministries and Young Adults. Jordan has also found an outlet for his musical gifts, playing percussion for one of the worship teams. And, over the summer of 2018, following the nudging and prompting of the Holy Spirit, Jordan quit his job and enrolled in Biblical Seminary at Fresno Pacific University. Part of his seminary training requires him to intern at a church 10 hours a week for the duration of the three-year course. Neffsville Mennonite is happy, and fortunate, to have Jordan here in that capacity. In fact, if you missed Jordan’s first sermon, go to the church website, click on the “Media” menu, and then on “Sermons.” Thank you for inviting, engaging, and now equipping Carren and Jordan to be more like Jesus. May we each live out that vision with everyone we meet.

Join us Sundays for worship at