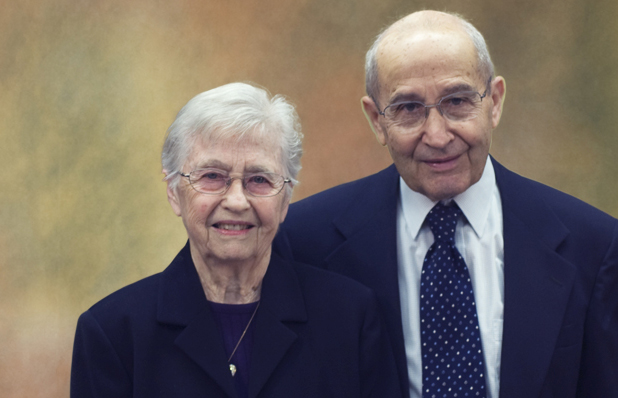 "Your Stories" is shared with the intent to inform, connect, inspire, and build community, as we learn about each others' lives.

Jordan Weidler, Ministry Intern, interviewed several people, asking them about their spiritual journey. He was astounded and touched by the stories and generosity he encountered. This is one of those stories.

About a month ago, I met individually with five longtime members of Neffsville Mennonite Church. I had to interview them for a writing project that was a part of my work at Seminary. Walking away from these interviews, I was struck by the depth of faith each member exemplified. One man, in particular, had me sitting in my car afterward with tears in my eyes, thanking God for the opportunity to meet such a loving and godly person. That man is Clarence H. Martin.

He has no shortage of humor. When I first walked into his apartment and introduced myself, Clarence remarked “I didn’t realize I’d see such a short person. What are you, 7 feet?” Instantly, I felt comfortable and able to be myself in Clarence’s presence. He has a kind of charm about him that is disarming and downright wonderful. During the majority of the interview, I figured that Clarence was somewhere between the age of 75 and 80. He had an outgoing personality, walked around with no trouble at all, talked about his daily 1 mile walks, and was a master storyteller. Towards the end of my time with him, I discovered my guess of his age was about 20 years off. Clarence is 98, soon to turn 99 on December 15. It took me a few minutes to pick my jaw up off the floor after discovering this.

After our introductions, Clarence and I quickly connected over conversation about farm life. Clarence grew up on a farm in the tiny village of Frogtown, Pennsylvania. At the age of six, Clarence was put to work on his farm. After school each day, it was his job to collect the eggs. “Sometimes there was a bossy hen that would peck my hand when I wanted to take her eggs. And sometimes there was a cocky rooster that would worry me,” says Clarence. When Clarence turned 12, he was given the task of getting up at 5:30 every morning to milk the cows before breakfast. Clarence remarks on this experience. “In the winter it felt good to press your body against a warm cow in a cold barn. Sometimes I almost fell asleep. The cow must have been very patient. Occasionally one would become impatient and put her foot in the pail when it was almost full.”

The farm wasn’t all work, however. Clarence tells great stories about playing in the meadow. Since the upper meadow was out of sight, Clarence and his siblings would build fires there. “This is was so much fun because we know we weren’t supposed to do it. A little naughtiness is very intriguing” recalls Clarence. Perhaps this is also why he and his brothers built a dam in the summertime to create a four-foot deep swimming hole. “At one point it overflowed the bank and made a big puddle in the meadow. We trampled it until we made a nice muddy hog hollow. We would go skinny dipping and roll in the mud until we were completely covered and then dive in the swimming hole. O! What fun that was!”

When Clarence turned 16, he started “running around,” a term which means socializing with other young people and dating. Clarence remarks on an interesting social norm back then: "We always went to Weaverland Young People Meeting on Saturday evening. After the meeting, we younger fellows would drive around and spy on dating couples. This was called ‘scouting’. It was a very common thing in our Mennonite Society…We would invite ourselves into the house and make a nuisance of ourselves until the girls would serve us a treat and then we would leave and go harass another couple." Nothing like young teenage boys hungry for a treat! Eventually, though, Clarence began dating and enjoyed the Sunday night outings when multiple couples would go out to Miley’s ice cream parlor in Ephrata to get a big ice cream cone for 5 cents. “I don’t think money can buy happiness because I don’t see how you could have more fun than we did.” At the age of 19, Clarence saw all his peers “going steady” with each other while Clarence was yet to be in a long-term relationship. Clarence recalls, “I remember really well one night I kneeled by my bed and I prayed ‘Lord, lead me to a lady that I can love and cherish all of my life.’” And so a few months later, on April 2, 1939, Clarence went on his first date with a girl named Mary Martin. Clarence was lucky enough to keep things rolling with this wonderful girl (though I saw a picture of Clarence when he was twenty and can understand Mary’s interest). They married on August 2, 1941.

One of the most moving aspects to my time with Clarence was seeing his love for Mary shine. Mary passed away in January of 2016. Clarence commented several times throughout the interview how incredible Mary was. “Oh she was a wonderful wife, just a wonderful wife.” Clarence showed me a childhood picture of Mary when she was five years old. “Look,” said Clarence lovingly, “she was beautiful already.” Clarence absolutely adored Mary. He talked about the night Mary passed away and how he cried and prayed like never before.

“We had a wonderful love life. She was a wonderful companion. I still miss her. I dream a lot about her. Almost every night, I dream of all the things we used to do together. She was everything that I desired.” They were married for 74 and a half years.

In 1943, Clarence and Mary had their first child, Jane Marie. Three years later they had a son and named him Dale Eugene. In 1951, they bought a farm in Sinking Spring, Pennsylvania. After several decades living the life of a farmer and raising the family, Clarence and Mary returned to the Lancaster area and began attending Neffsville Mennonite Church in the early 1980’s.

When Clarence and Mary first began attending Neffsville Mennonite Church, Clarence heard a sermon that stuck with him forever. He recalls, “The Pastor one morning preached about being an encourager. That stuck in my mind. I made my mind up. That’s what I want to be.” And so Clarence set out to be an encouragement to other people and he still does this today. “If I can make a person smile, that’s good pay for a day’s work,” said Clarence, smiling himself. After volunteering at Ten Thousand Villages for several years in his eighties and nineties, and experiencing a little fatigue one day, Clarence’s doctor said to him, “You’re 94 years old now. Maybe you should slow down a little.” Clarence did slow down, but indeed only a little. He still meets with a half-dozen people once or twice a week to encourage them and help them. “Sometimes I pray and ask God, why am I still here, almost 99 years old? I must be here for a purpose. I believe God has kept me healthy for a reason and I want to keep helping people.”

I think Clarence got paid overtime the day I visited because not only did I walk away from that meeting with a smile but also with tears in my eyes. Tears of joy and gratitude for having met such a wonderful human being and lover of God who has been a member of Neffsville Mennonite Church longer than I have been alive.